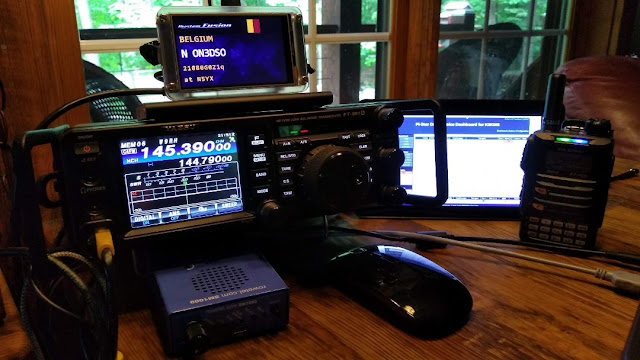 For a while now, its been a little tough to get regular DX the old-fashioned way. Aside from that, FT8 works fairly well on 20m, but that's not for everyone, and it pretty robotic and impersonal. There isn't enough people on HF DV like the FreeDV 1600 and 700D modes, so it's less than a thrill right now.

That being said, there is hope. There has been a tremendous increase of activity on the MMDVM front. With new gadgets hitting the market as fast as baby rabbits, even the Tech hams can now talk around the world, and on an HT to boot! Yeah, it's not like the traditional and personally rewarding "contacts" like we are used to, flexing our RF muscles in cunning and calculated ways, but the end result is the same. Hams talking to hams around the world, and how cool is that!

So my FT-991A isn't used quite as much right now for DX, but the FTM-400XDR and FT-70D are barking up a storm from my ZUMspot and a few connected Yaesu WIRES-X repeaters in the area. My favorites right now are America Link and MNWis. Ride the wave, baby! But if the internet goes down, make sure you are squared away in your own shack. Independence is highly rewarding!