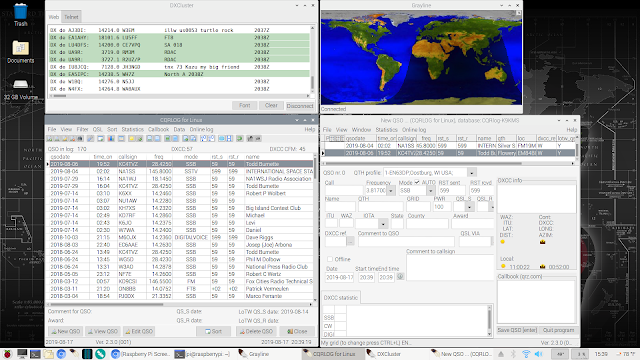 A couple years ago, I wrote about several Windows-based and web-based logging software systems for amateur radio enthusiasts. The web-based software provides users the option of using any OS, as all that is needed is a web browser, but on the downside, you also need an internet connection.

Long ago, while looking to get off the Windows bandwagon, I experimented with Linux, Redhat, and a few other OS's, but recently, I was introduced to Raspbian, a Debian-based / Linux-based OS designed for the Raspberry Pi computer. My opinion of Raspbian so far is very positive. The fact that the OS is free, and thousands of programs are available for free, helps my wallet recover from the ever-expanding money pit Windows based computers can be.

Currently, I have ten computers consisting of the following. Maybe this is more info than you really want to know, but this should give a bit of understanding regarding my OS and computer experience.

Now let me jump forward to what I really want to talk about - the new Raspberry Pi 4 and CQRLOG. The CQRLOG software package is touted as the best Linux-based amateur radio log program on the planet, and I may just have to agree. The Raspberry Pi 4, on the other hand, may just change the way we currently look at desktop computers. This is good.

I am a big fan of Ham Radio Deluxe, a fantastic Windows-based program, but now it is quite expensive, initially $100, then $50 per year for maintenance. And if you still mail out QSL cards, the annual cost of the hobby can really eat into the household budget. More recently, I was using the Log4OM software, another fantastic Windows-based program that has most of the bells and whistles of HRD, but the best part is Log4OM is free, but please make a donation to their work if you like it.


Then there's CQRLOG, an open source software system that, when used with a few other Linux-based open source software packages, rivals anything out there, and it's free! CQRLOG integrates with LoTW, HRDlog.net, eQSL, and Clublog. It also provides live logbook support through HamQTH or QRZ. HamLib takes care of TRX controls so current radio configurations auto-populate in the QSO window.


You can find all available software packages in the Raspbian/Debian repositories. In Raspbian OS, simply go to the Preferences menu and click on Add / Remove Software. Search Amateur Radio and select all the desired software packages. Easy as pi.

No comments:
Email ThisBlogThis!Share to TwitterShare to FacebookShare to Pinterest

Back in the day, we were all taught that the most significant component leading to successful QSO's is the antenna. A really good, well tuned antenna can help you generate more QSO's with even the most mediocre radio, than any other upgrade you can make in your system. For this reason, we first need to analyse our antennas in every aspect, and second, be sure we are providing the best possible environment for the antenna to work properly. With this in mind, antenna design, polarity, placement, and feed should all be considered.

At my home QTH, I currently have two antennas set up. For 144/440 MHz, a Comet GP-6 sits atop a 55 foot tower, and for HF work, a GAP Titan DX is mounted 2 meters above the ground, both in a less-than-ideal environments. We live in a tall forest with sandy soil and beach sand containing magnetite, and my home and barn have metal roofs. The GAP is positioned half way between the buildings, about 30 feet from either. As you might agree, not the best of situations as far as antennas go, but that's the best we can do here, given all factors.

As the antennas are in their current position and environment - on a sunny August 21 with heavy foliage - I captured the following readings with my Comet CAA-500 Mark II antenna analyzer. I am pretty happy with what I found. This should help me take better advantage of the frequencies that might provide the best situation for success.


Even so, I am having a great time making QSO's all around the world and making good distance in the local area. So far, I have nothing to complain about, though I have no experience or knowledge of what it is like having what one might consider ideal conditions. I'm in this for the enjoyment of the hobby, and "just havin' fun" is what I am doing!

No comments:
Email ThisBlogThis!Share to TwitterShare to FacebookShare to Pinterest

When Nancy and I go out to a new restaurant, we always ask if they have my personal favorite, Key Lime pie. But since last week, I may have to change my thinking and cautiously consider Raspberry...

First, it was the Raspberry Pi zero for my ZUMspot. I was so amazed with it's simplicity and usefulness, I had to get a Raspberry Pi 3 B+. It was like a whole new Raspberry world opened before me. And all I could think about before was Key Lime pie. Ha! And now comes the Raspberry Pi 4, the newest Pi on the pi rack, my favorite Pi so far. 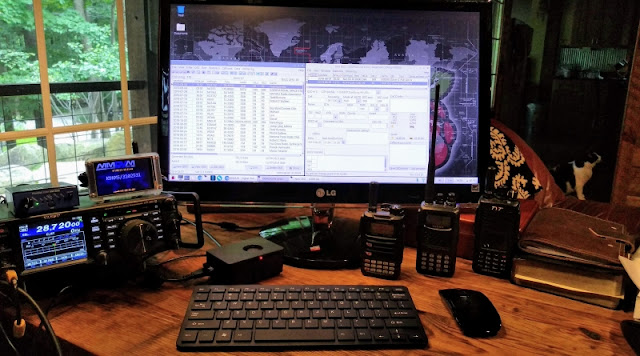 The new and amazing Raspberry Pi 4 (2GB) running Raspbian is my shack's main desktop computer.  CQRLOG software is now my go-to radio log, the FreeDV software is set up for digital HF, and Gpredict for satellite tracking. The Raspbian/Debian repositories have a Ham Radio package that includes a host of programs for amateur radio Linux users. Did I mention all of this open source software is free? Yup. Free.
No comments:
Email ThisBlogThis!Share to TwitterShare to FacebookShare to Pinterest

Of all the out-of-the-box things I can think of, this was not one of them - sending pictures via amateur radio from space to earth, especially when they originate from the International Space Station orbiting the earth at 19,000 mph!

Here are the results of my very first attempt with SSTV on August 3, 2019. 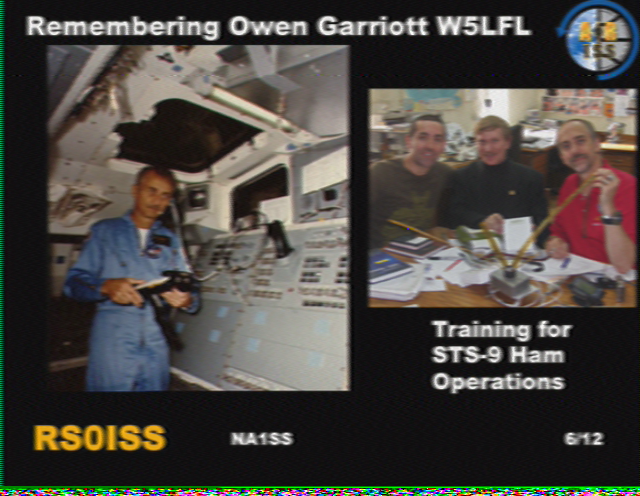 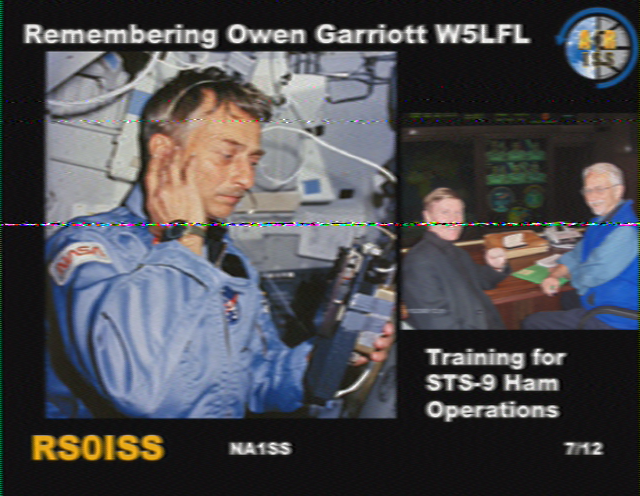 And the confirmation from ARISS. 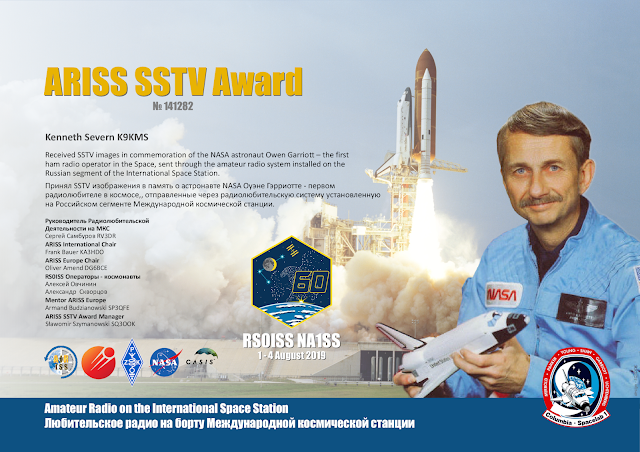 How cool is that!

Are you experimenting with amateur radio? If not, why not.