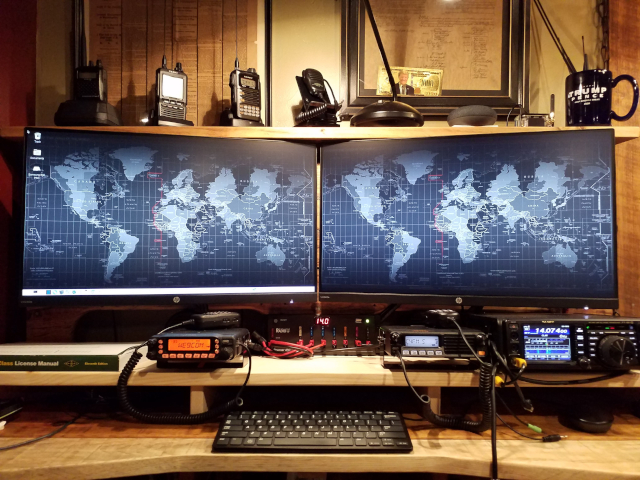 The planet earth has seasons, and that's a good thing because who can take twelve months of winter? I go through seasons too, probably just like you. Sometimes I get kind of bored with things and just need a change. Other times, after using something for a while, I get to a certain level of frustration that I ask myself, "Why do I put up with this?". Then the creative juices begin to flow and my tiny Shack gets an update!

I decided to take my credenza and add a small shelf to the front to hold a keyboard or two. Then I added a small back-angled shelf on top to hold the radios and allow small storage under the radios. Lastly, I added a back panel to mount two monitors, an antenna selector switch (behind the right monitor), and a RigRunner 4007U (below the monitors). The HP VH240a HDMI monitors with built-in speakers are mounted with Mount-It! MI-2829 tilt-swivel brackets. Two large pass-through holes at the base of the back panel put all wiring behind the credenza for a nice, clean install. A small shelf up top is home for the HTs, the ZUMspot and some other small things.

The shack is now run entirely on a Raspberry Pi 4B 4GB with the latest Raspberry Pi OS. The Debian Ham radio bundle which includes CQRLOG, JS8Call, WSJT-X, FreeDV, and a few other helpful programs, drive my USB connected Yaesu FT-991A. A Rowetel SM1000 sits to the right of the FT-991A. Also pictured is a Yaesu FTM-7250DR, and my old FT-7800R which will be trading places with my less-old FT-7900R, now used for local repeaters and simplex in my workshop.

Right now, I am quite content with this setup. But yes, I still have to get the old Barker & Williamson BWD-90 folded dipole up for HF. I like the GAP Titan DX, but verticals are so noisy compared to the folded dipole. And then I should probably do this, and maybe do that, or maybe just... be content!

So now I can enjoy Ham radio again at my tiny new shack. And then the next season will come. Change can be good, and God is always good!
Email ThisBlogThis!Share to TwitterShare to FacebookShare to Pinterest